When sudden strange sounds were heard from the skies the world was thrown into a state of chaos and panic. Now humans have to fight against each other in order to survive. Here we see two survivors who both come a cross a backpack that can save their lives, however only one can have it...

This short film was an interesting but also difficult task that we took on for this competition. Due to scheduling issues with one of the stunt performers we ended up having to shoot a week before submission which made it even more difficult to get all of the editing and visual effects done along with the sound design. We used a Canon 550D DSLR camera to film with a Neewer monitor attached to it with the Rode Video micro on the camera and the Video Mic Me on an IPhone for the behind the scenes filming. Our location was in a wooded area near where we are based in London and we used it because it had the perfect density of trees but also allowed for a lot of natural light to flood in.

In order for us to get our shot of the log being broken over one actors back we had to score it with a saw so that it was weak enough to break but also look good. We used stunt pads to make sure our actor wasn't injured in any way. Graphical work was done on a still image that was then tracked to our intro scene to show the transition into a dystopian world. We used multiple layers and textures to make it look realistic and gave small details such as bordered up or broken windows.

The prop rock used in this short was created by cutting a large sponge into a rock shape and then spray painting it with rock textured paint to make it look real. We then added mud to it on set in order to make it fit the scene. 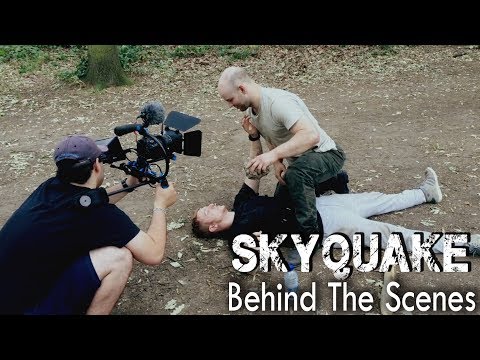