How to Use a Lavalier Mic

Lavalier microphones – also known as lapel mics or clip-on mics – are small wired microphones that are widely used in filmmaking and broadcasting. They are ideal for recording dialogue as they are discreet and unobtrusive and can be positioned close to the mouth while remaining out of sight. This ensures you can get clean, clear audio in a variety of recording situations, whether that’s vlogging, reporting to-camera, or recording an interview.

There are two main things to consider when using a lavalier mic: how to position it and how to connect it to your recording device. Let’s take a closer look at what you need to know about each. 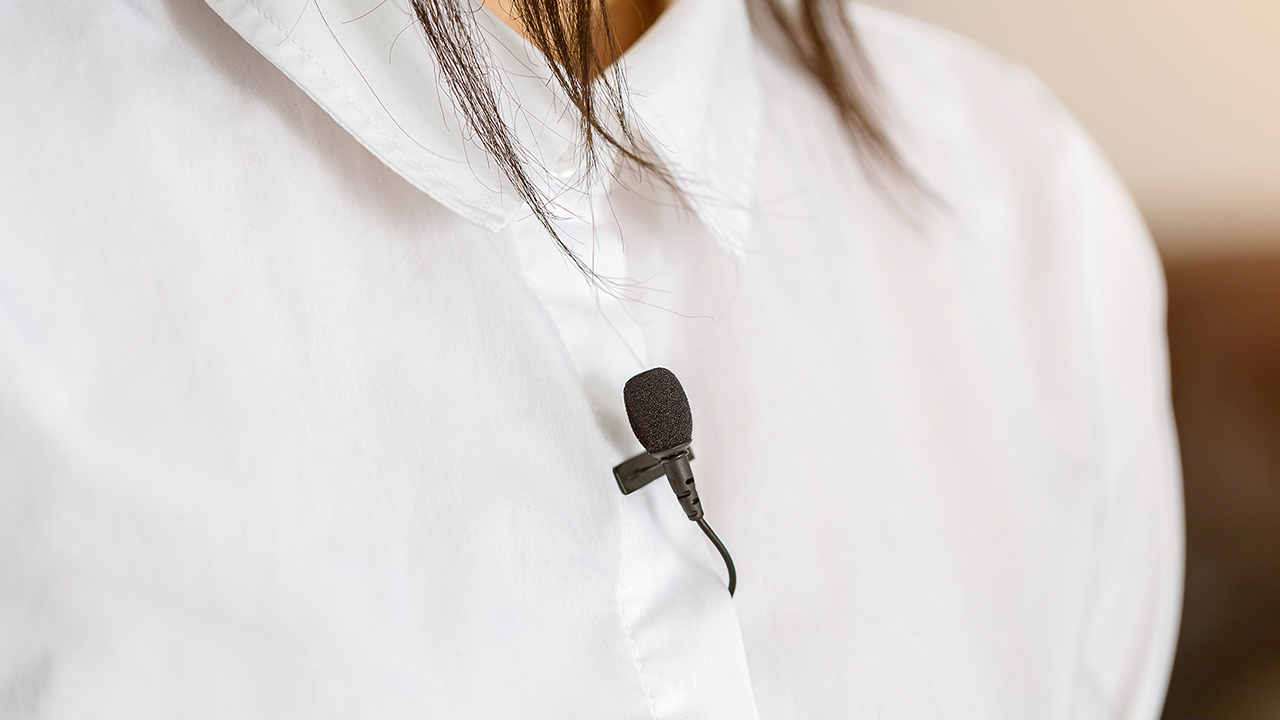 How to Position a Lavalier Mic

When positioning a lavalier mic, it’s important to think about its proximity to your sound source (usually you or your subject’s mouth) in order to get the best sound possible. Most lav mics feature an omnidirectional capsule, meaning they pick up sound from all directions and are therefore quite forgiving when recording. However, as a general rule, it’s recommended that you position the mic on the chest, about a hand-span distance (20-30cm) from the mouth. This will give you a natural, uncoloured sound.

Attaching Your Lav to Its Clip

All lavs come with a clip that allows you to mount the mic onto a piece of clothing. For first-time users, these clips can be a little confusing, but they are very easy to use. Simply slip the windshield off the mic, pinch the spiral clasp, insert your mic into the loop and release the clasp to secure the mic in place. Now you can slip the windshield back on.

Positioning a lavalier mic is easiest when there is an edge of clothing to secure it to, such as the lapel of a jacket, seam of a button-up shirt, or the edge of a tie. Just be sure to keep the mic clear from any other piece of clothing that may rub against it, as this will be audible in your recording.

If you are wearing clothes that don’t offer a strong seam for mounting, such as a singlet or t-shirt, things can get a little tricker. You can mount the mic on a neckline – just be aware that if the mic is right under the neck the sound can be coloured and sound strange. You can avoid this with a looser neckline, or by mounting the mic over to the side, rather than directly below the chin.

If you are wearing a singlet, the shoulder straps are another great place to mount a lavalier mic. This is often the best solution if you are wearing exercise clothing. Or if you want to get creative, mounting the mic underneath a headband also works well. Provided the mic is 20-30cm from your mouth, and does not have clothing rubbing against it, you will get a great result. 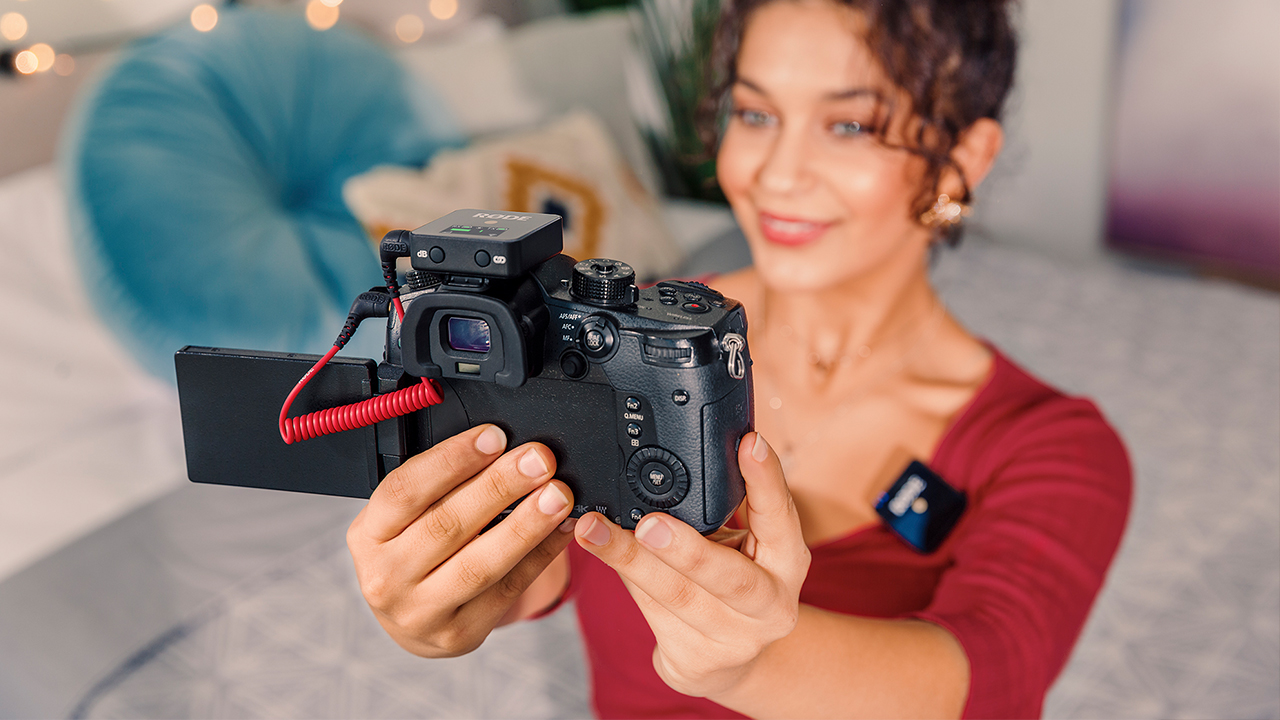 To keep your video looking clean and professional, you may want to consider concealing the cable. You can simply tuck it out of sight under your jacket or run it inside your shirt. Pro sound engineers will use drapers' tape to secure the cable against the inside of clothing; you could improvise with gaffer tape or even regular sticky tape if you want to keep things out of sight. Using what’s known as the “broadcast loop” will give you a neat, professional profile. Click here for an in-depth look at how to mount a lavalier mic on yourself or talent.

Connecting a Lavalier Microphone to a Recording Device

Once you have your lavalier mounted and positioned nicely, the next step is connecting it to your recording device. There are two things to consider here: what kind of device you are plugging it into and whether you need to connect wirelessly or not. This will determine what kind of equipment you need.

If you are connecting your mic to a smartphone or tablet, you will need a microphone with a compatible connector – the RØDE smartLav+. This has a TRRS jack, which is the same connector found in most computers and mobile devices meaning you can plug it straight in without the need for an adaptor. Simply insert the mic into your device’s headphone port, select it as your input and output device in your audio settings or your recording software and you’re ready to record.

This is a good option for vlogging, recording a tutorial, or any video where you are seated in front of the camera. If the cable on the smartLav+ isn’t quite long enough to reach your device, or you need some extra leeway to move around, you can use a RØDE SC1 extension cable.

If you are recording into a DLSR, mirrorless or compact camera, or an audio device like a portable recorder, you will need a lavalier mic with a TRS jack, such as the RØDE Lavalier GO.

If you need space to move around when recording with a lavalier mic, such as if you’re filming a tutorial or presentation, or you simply do not to be tethered to your recording device, using a wireless system is the way to go. There are a number of options in the RØDE range, but for a compact, affordable and easy-to-use solution, the Wireless GO is perfect.

Wireless systems are comprised of two main components: a transmitter pack, which is attached to the subject and captures and transmits the audio, and a receiver pack, which plugs into the recording device and receives the audio from the transmitter wirelessly.

The Wireless GO is a unique microphone in that it features a capsule built into the transmitter pack, meaning you don’t need to use wired lavalier mic – just clip the transmitter onto your chest as you would a normal lavalier. Of course, if you prefer using a standard lavalier mic, there is an input for this too. This is a TRS input, so you need a lavalier with a TRS jack. The Lavalier GO is the perfect option.

Once you have your lavalier set up, simply plug the receiver into your camera using the supplied patch cable and you’re ready to go. 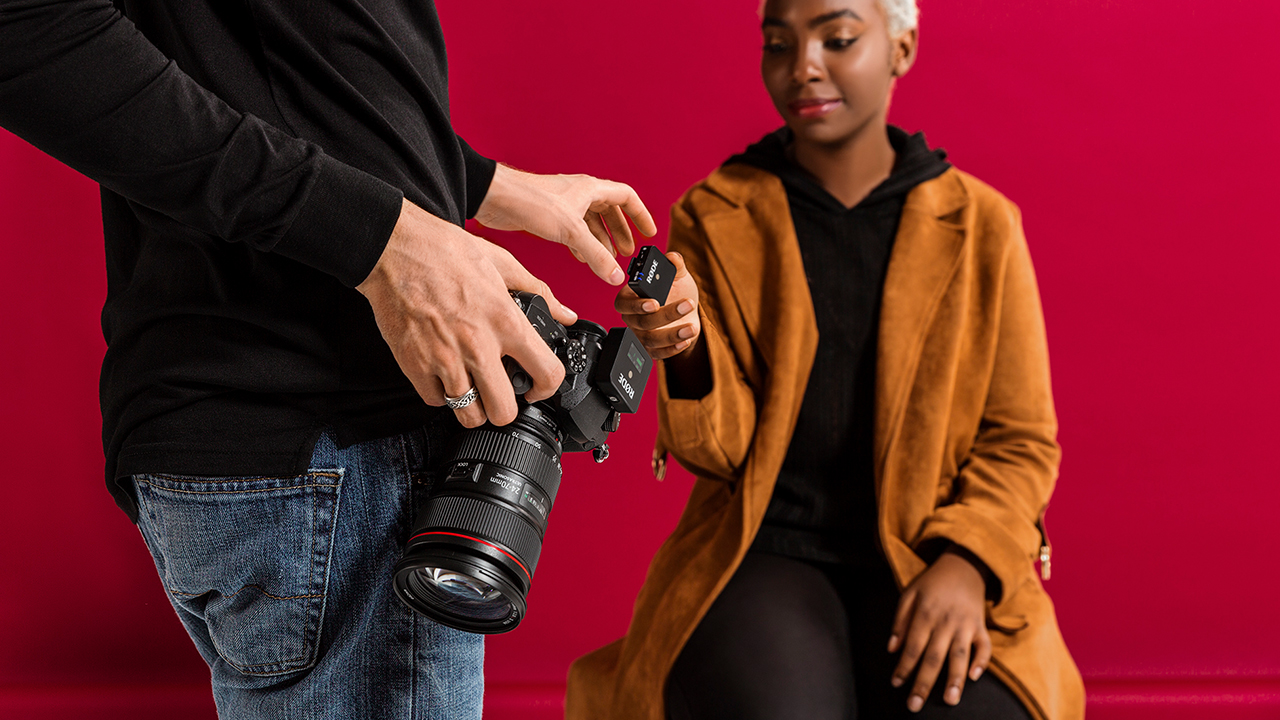 When it comes to using mics with a 3.5mm jack, such as lavalier microphones, you need to pay close attention to what kind of output your microphone has and what kind of input your recording device has – specifically, whether they are TRS or TRRS.

TRS/TRRS incompatibility is a very common reason for microphones not working with certain devices. These jacks look very similar, but with RØDE products we’ve made it easy to identify what type of connector your microphone has but colour-coding them: all TRRS connectors are grey, so they can be plugged directly into computers and mobile devices; all TRS connectors are black, so these can be plugged directly into regular audio and camera equipment.

If you already own a microphone, but it’s incompatible with your recording device, don’t worry – there are a range of RØDE adaptors that allow you to use a TRS microphone with a TRRS device and vice versa.

For example, if you own as Wireless GO or Lavalier GO (or any mic with a 3.5mnm output, such as a RØDE VideoMic) and want to use it with a computer or mobile device, which have TRRS inputs, you can use the SC4 or SC7 adaptor. Or if you want to plug a mic with a TRRS output like the smartLav+ into a device with a TRS input, like a DSLR camera, you can use a SC3 adaptor.

RØDE Lavalier GO with a SC4.

If you have any questions about a specific device you are using or the best audio solution for you, get in touch with our support team and we’ll be happy to help.